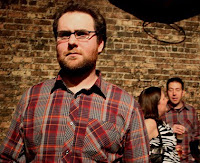 Nat Topping is a Detroit-bred, Chicago-based writer, actor, voiceover talent, sketch comedian, singer/songwriter and human being who, despite having a long list of qualifications as well as the necessary day job, still finds the time to be lazy.

He performs around town with the Sketch groups Robot vs Dinosaur and Crassus, as well as occasionally perfoms solo as 'The Reality Fairy.'  Sometimes, people even cast him in plays.  If you stick around on the blog long enough, inevitably you'll see a plug for something or other.

He's also an avowed 'pleasant pessimist.'  Nobody's really sure what he means by that, which he claims 'proves his point.'  If you ever have the occasion to ask him about it, don't.  It will be a waste of your time.